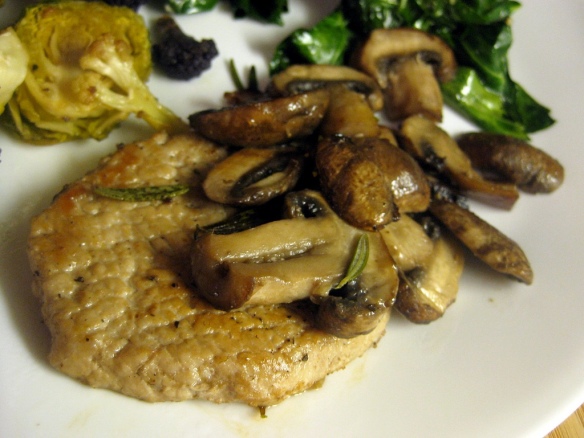 I made a visit to the Kocurek Family Artisanal Charcuterie stand at the HOPE Farmer’s Market, where I found precisely what I had been looking for: lard. And what’s more, not just any old lard, but rosemary lard. Yeah, I had never heard of such a thing before, either. But it sounded like a winner.

I haven’t used lard in about five years, but I tried it out with some pork cutlets and fresh rosemary sprigs I had on hand, and it turned out great. Of course, I used my antique cast iron skillet and got great results. I decided to eat some delicious, leftover roasted winter vegetables, and added some quickly-sautéed collard greens and with garlic. All in all a quick, straightforward, but satisfying meal.

1. Melt lard over medium heat in a cast iron skillet.

2. Add pork cutlets and cook for about ten minutes. Turn over.

3. Add mushrooms, stir, and cook for an additional five to ten minutes or until mushrooms are done and pork cutlets are lightly browned. Near the end of cooking, sprinkle rosemary leaves and pepper over cutlets. Once done, serve immediately.

Serves 1-2, depending on the size of your cutlets. 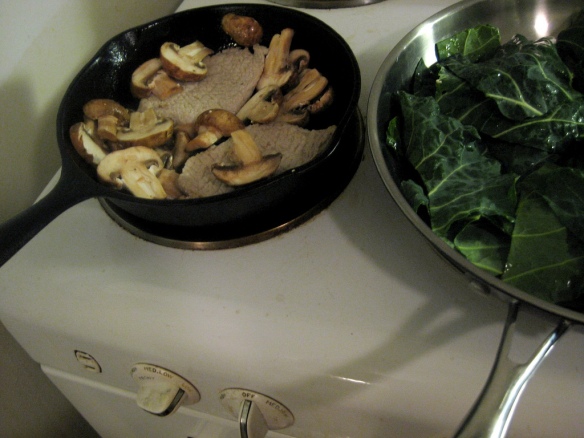