I didn’t see my parents over the holidays, so when they came down for a visit a couple of weeks ago, we had a Christmas in March gift exchange. Among the loot I scored was the recently-published cookbook Vefa’s Kitchen, by Greek food expert Vefa Alexiadou.

Let me back up.

In August 2002, I went to Corfu and fell in love. Not with the asshat with whom I was traveling, but with the Greek islands. My week in Paleokastritsa, in the middle of the August holiday, was filled with fresh Greek salads with chunks of feta the size of my head, lazy afternoon walks through hillside olive terraces, swimming in the cool turquoise sea, scrambling over hot rocks and heaping ruins, pasty Brits burning on the beach, and sun-kissed Italians buzzing past on mopeds. In other words, I was in heaven.

I’ve longed to go back ever since, but found myself repatriated to the USA in 2005. Sadly, I no longer get the six of weeks of paid vacation a year that is standard in Britain (and which is considered stingy by Continental Europeans!), and the closest I have been able to get to the dreamy Golden Fox Hotel pool in Lakones (truly, my favorite place on earth) is my cracked concrete, 1950s apartment building pool in downtown Austin (if you really squint, so you can just barely see the blueness of the water, and if you can manage to drown out the choppers and sirens, you can just about transport yourself…).

As anyone who knows me is aware, I am acutely, chronically homesick for England; and I could go on and on about all the things I miss there. But I think the Greek islands are the ultimate. The climate, the mountains, the food, the sun, the olive groves, the turquoise water, the palpable sense of history, the feral cats, the blue, blue doors – what’s not to love?

So my stepmother, being the observant person that she is, realized that Vefa’s Kitchen would be a very welcome gift. It’s a big block of a book, bright blue and white, filled with diverse recipes from all over Greece, and littered with luscious photographs. Flipping through it, the first one that caught my eye was Meatballs with Yogurt from Thrace. I was determined to make it immediately, and my partner, Eric, was forced to look at the beautiful photograph in the book repeatedly while the meatballs baked.

“But, look at them! They look delicious!” 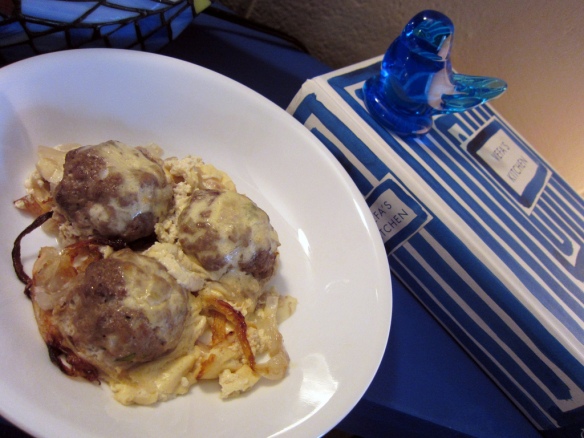 The cookbook is so spellbinding, in fact, that Eric suggested we christen April “Greek Food Month” and cook almost exclusively from Vefa’s masterpiece. Having recently planted our own crop of Mediterranean herbs, tomatoes, and lettuce in our nearby allotment, this seemed like a great way to incorporate them into some new dishes. Vefa’s Kitchen, like traditional Greek food, is also heavily vegetarian, which makes it easy for the omnivore cook (me) and the vegetarian sidekick (him). There are also pages and pages of dessert and pastry recipes, which I look forward to tackling. I can’t wait to try the Ruffled Milk Pie.

Meanwhile, my coworker, Alex (who spent the first few years of her life in Athens) and I have been joking about moving to the Greek islands for the past two years. We often discuss Greek culture and food over our Dublin Dr Peppers, and drool over the daily photographs posted on the Greek Islands Facebook page. When I told her about my Greek Food Month, she mentioned that April was the perfect choice, because the fun could be finished with a spread of traditional dishes for Greek Easter. This idea then evolved into me inviting myself to Alex’s backyard for a full celebration. It’s still more than three weeks until Greek Easter (which falls on the same date as Western Easter this year), but we’ve already begun the preliminary menu planning and started searching for a local source of young goat!

So the countdown to Greek Food Month begins. Check back here tomorrow for the first dish!

Fruit and vegetable market in Corfu, by Lee Cannon on Flickr.