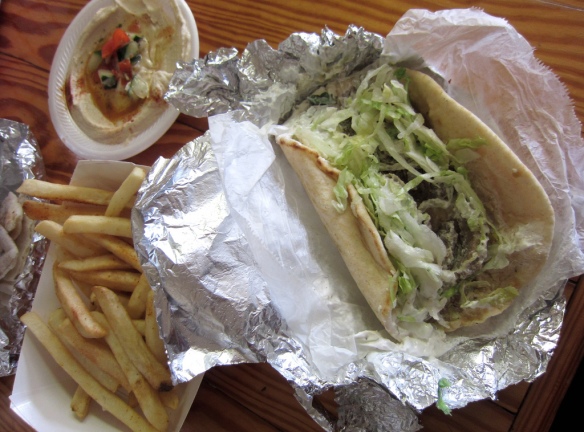 In honor of Greek Food Month, my coworker Alex and I decided to hop across the Drag to Kismet Cafe, a Mediterranean spot we’d been meaning to try for ages. Thought it was with some trepidation that I temporarily abandoned by standby, Flying Falafel, the trip was well worth it.

Due to the signage, we’d always assumed this was a Greek cafe; but all evidence points to it being, in fact, Jordianian! Not only is the menu heavy on the Middle Eastern fare, but the restaurant advertises its halal status and proudly displays a framed photo of King Abdullah and Queen Rania. Unfortunately, they didn’t have menssef on the menu; if they had, I would’ve ordered it! We decided to keep with the original, Greek theme, and ordered lamb gyros instead, with a side of hummus.

The hummus was absolutely delicious, though my companion thought it was a tad on the salty side. Topped with diced cucumbers, paprika, and a drizzle of olive oil, it was rich and fresh. 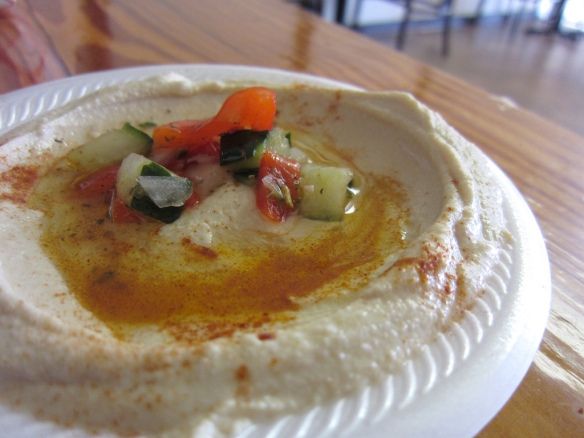 Alex, the expert, pronounced the gyro superior to Flying Falafel’s: a good portion of thinly sliced lamb meat, excellent homemade tzatziki, and a very generous amount of feta (for only 50 cents extra!). We decided to get the lunch combo special, as advertised on a sandwich board outside on 24th Street, which included the gyro, a side of serviceable fries, and a drink for $5.55. That’s a good deal. I don’t know if it was better than other gyros I’ve had around town, but it was definitely delicious. 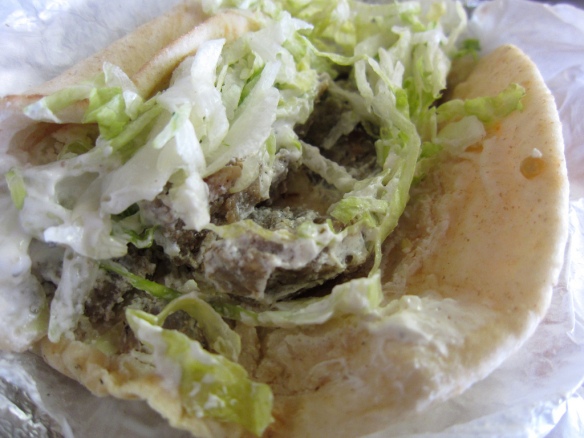 Our only complaint was the extremely slow service. Granted, we arrived in the middle of the noon lunch rush, but it took over ten minutes (maybe fifteen, even) for our number to be called. Everyone else who had been in line behind us had already been served, and we were beginning to wonder if we’d been forgotten. For people on a short lunch break, this can be problematic (though, to be fair, this is my complaint at Flying Falafel, too!). I suspect that, on this occasion, someone in the kitchen forgot to put the fries in the deep fryer.

The restaurant atmosphere was standard for West Campus: plastic chairs, flashing flatscreen TVs (you just can’t get away from these things), and the hum of hungry students chattering, studying, and hanging out. There are also cute iron bistro tables on 24th Street, which is a fabulous people-watching location. And they’re open till 4:00am, seven days a week. Overall, the food was great, the price was right, and I will definitely be back, as it’s a stone’s throw from my new office. Though we were in a Greek mood this week, I look forward to trying some other menu items at Kismet, including the Vegetarian Sampler Plate, the Eggplant Gyro, and the Sheesh Tawooq! Luckily, I’ll still walk past Flying Falafel on my way home from work, so I’ll be stopping in there on Thursdays for the menssef special. 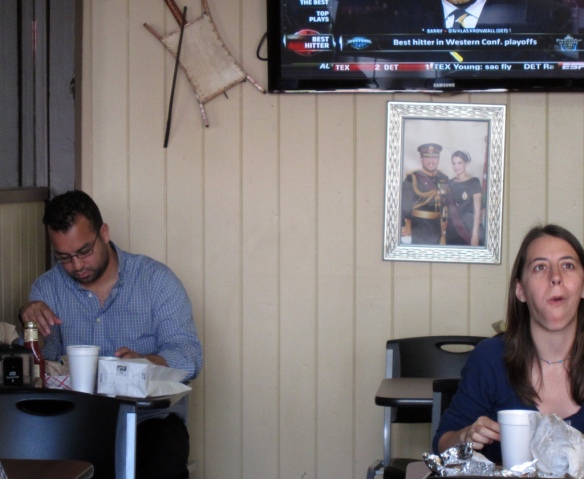