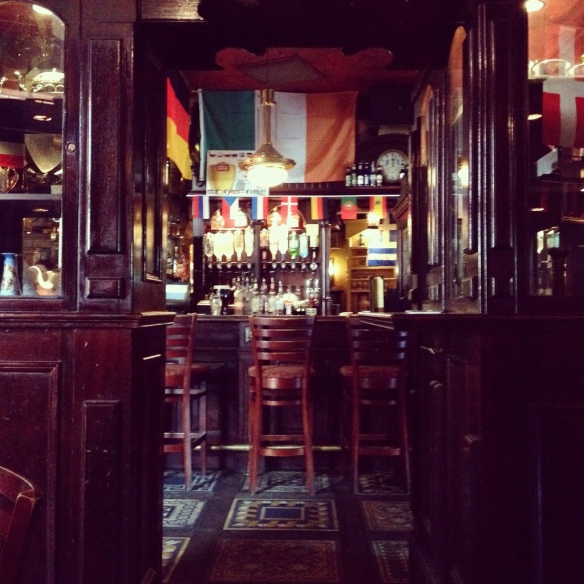 As we get deeper into Euro 2012, I thought it was about time I finally got around to writing about Fadó.  Fadó has been in Austin about as long as I have, give or take a few years (I’ve been here since 1997, with a four-year detour in the UK).  I went there a couple of times in college (including, once, with members of the Secret Service—ask me about that story sometime off the record), but I hadn’t spent much time there since returning to Austin six years ago, aside from a couple of  quiz nights and one very fun Blaggards show.

Let’s throw in a Gerrard pic, because, hey, why not?

Since the boy moved to Austin, though, I’ve gotten into watching soccer again.  I was introduced to the glory of the Beautiful Game while studying at Lancaster University, in England.  Most of my roommates were from Merseyside, so we watched a lot of Liverpool matches, and I’ve loved them ever since.  Steven Gerrard has been my favorite player since 1999.  Let’s not talk about this season.

Thank to Eric’s status as a professional soccer blogger, I’ve had the opportunity to get beyond the Thighlights and really appreciate the sport.  We only have an old, thirteen inch television; for most big matches we go to a bar or a friend’s house.  We’ve spent most of our time at Fadó this season, and, a few weeks ago they kindly invited us to a sports bloggers’ happy hour.  So please note that some items I review below were comped on that occasion.  We also received appetizer and drink passes (good throughout the Euro), a Guinness pint glass, and amazing T-shirts. 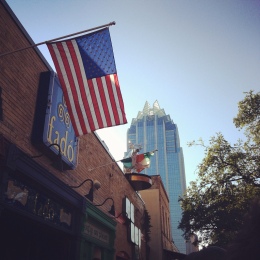 The atmosphere at Fadó is really nice: it’s both cozy (thanks to the secluded wooden booths) and convivial (thanks to all the soccer fans).  The design of the place is based on a traditional, nineteenth century Irish pub, and, though Fadó is a chain, the result is very homey and comfortable.  I don’t think I’ve ever been to Fadó and left in less than four hours!  The crowd is mixed and diverse, changing based on the event (they also host parties, pub quizzes, and rugby fans).  The staff is attentive and helpful, although you may find it difficult to get a refill in the middle of, say, the FA Cup.  Parking can also be a problem due to Fadó’s prime location in the Warehouse District.  For soccer watching, I’d advise either arriving early and scoring on-street parking or simply riding Capital Metro.  Another thing I really like about Fadó is the fact that I have never had to wait in line for the women’s room!  In fact, they even have a secondary set of restrooms on their back patio. 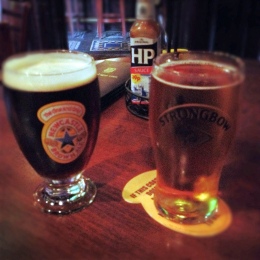 Now, on to the food!  Let’s start with the beer selection, shall we?

Fadó has a great selection of British and Irish beers on draught, including Bass, Boddington’s (our favorite, lately), Guinness, Harp, Kilkenny Cream, Newcastle Brown, Smithwick’s, and Strongbow, in addition to some typical Continental offerings, including Carlsberg, Hoegaarden, and Stella Artois.

The list of bottled beers is even longer, encompassing everything from Coors Light to Magners Pear Cider; and the whiskey menu is very impressive indeed, with 21 offerings, including a whole array of Bushmills and Jameson as well as five more Irish whiskeys and eight varieties of Scotch.  They also serve wine, liquor, and some delicious Irish coffees. 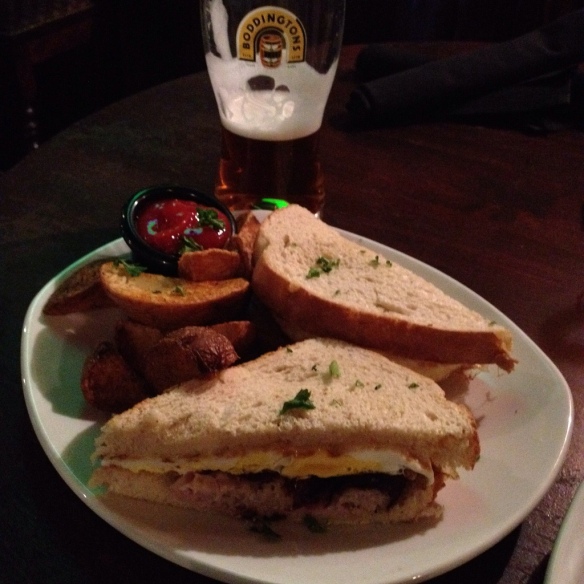 Our favorite dish is the Hangover Sandwich, consisting of two fried eggs, Irish sausages, bacon rashers, and Irish cheddar, all served between thick slices of tasty, tasty sourdough and served with potato wedges and ketchup.  Since the full menu isn’t available until 11:00am, and we are often at the pub early to catch a live EPL match, this is our go-to order at Fadó.  At $9.95, it’s also a great deal; sometimes, we split it. 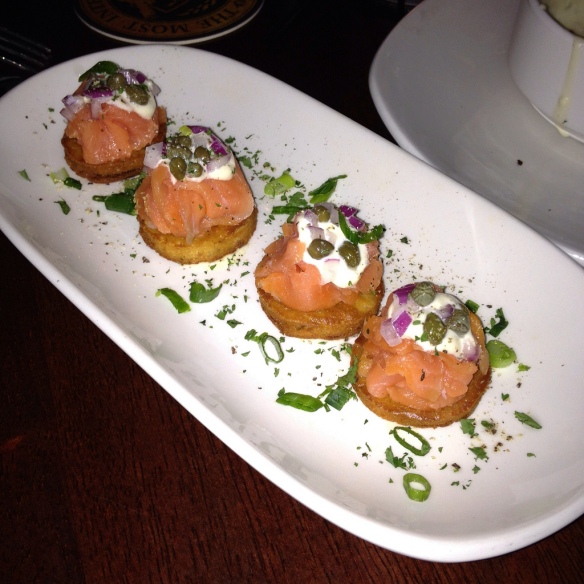 The Smoked Salmon Bites ($8.95 for four) were a bit of a revelation for me.  Generally, I am not a fan of smoked salmon (I know), finding it a tad too fishy for my tastes, especially when paired with the distinctive and decidedly pickled flavor of capers.  However, these bites were excellent, and I plan to order them again.  They were packed with flavor and well balanced with the horseradish (I love horseradish).  I could’ve eaten a whole pile of them! 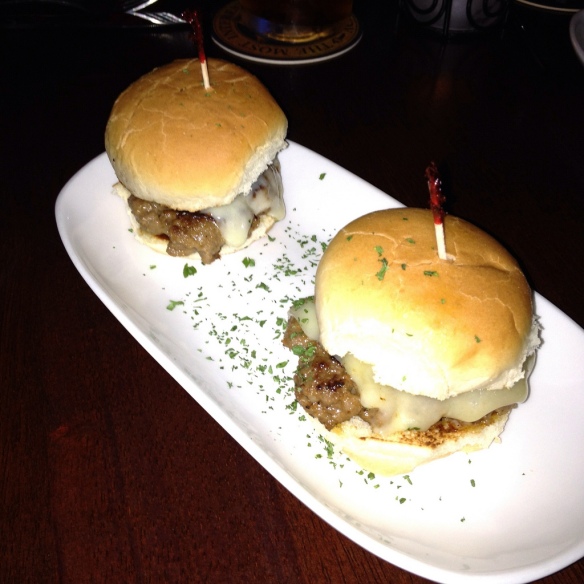 The Smithwick’s Mini Burgers ($8.95) were also fantastic: three Smithwick’s ale-flavored beef burgers served on adorable little grilled buns with Guinness mayonnaise, pickles, onions, and melted cheese.  The burgers were perfectly cooked (medium well), and combined beautifully with the other flavors.  These are some must-eat sliders.  They were a big hit with our friends, too. 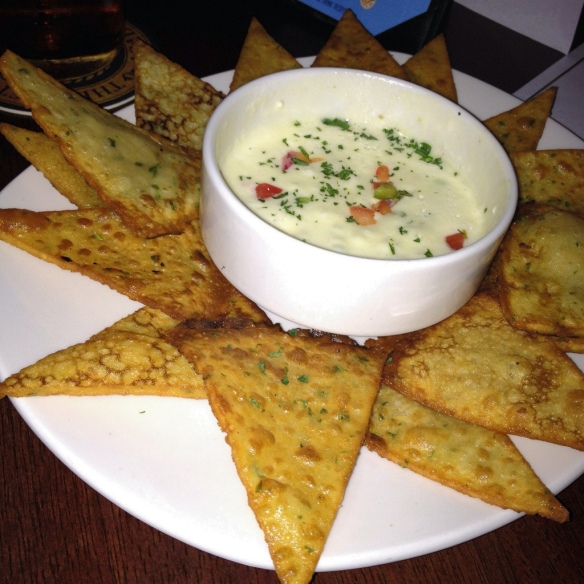 The first time we had Fadó’s Cheese Dip and Wedges was a couple of years ago when we attended a weeknight pub quiz*, and we’ve been talking about it ever since.  These things are so addictive!  I don’t know what they do to this queso (the menu just says it’s a “creamy blend of Irish cheddar, pepper jack cheese and green onion”), but it’s one of my favorite appetizers in Austin, especially in the winter.  The boxty wedges are deep fried, and each bite just melts in your mouth in a delicious symphony of cheese.  At $8.95 per order, I’ve been known to demand two in a single visit! 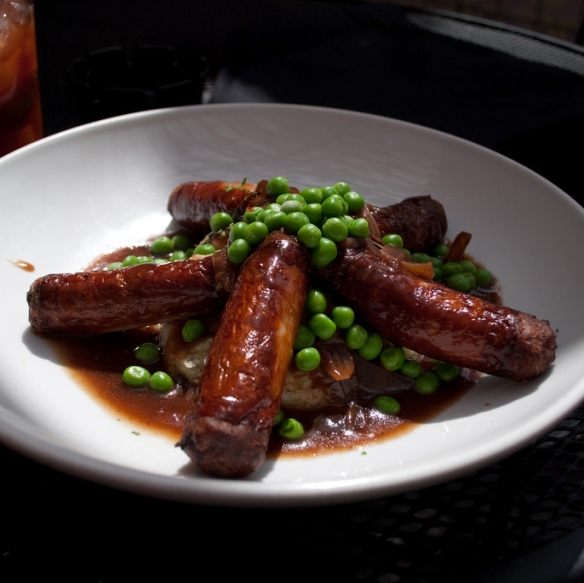 I have to talk about the Bangers and Mash.  The first time I ordered this was during the aforementioned FA Cup.  I couldn’t believe my eyes: there were five bangers, on top of a mountain of mashed potatoes and peas.  Maybe it was because I’d been sick for two weeks and had little to no appetite in the days preceding my visit, or maybe it was just because I am a Huge Glutton, but, for once, my stomach was as big as my eyes, and I ate the entire thing.  And I saw that it was good.  The Bangers and Mash are $12.95, but, honestly, this would make two meals for most normal people.  So, so good.  (Photo by kittygutz on Flickr.) 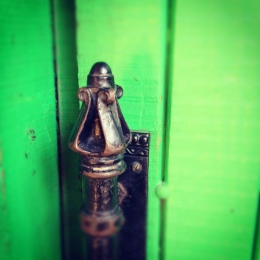 Be sure to check out the rest of the traditional pub menu, too, because Fadó is definitely a great place to get your fix of  British Isles comfort food.  In addition to the Guinness and Tayto Crisps on offer at the bar, they also serve up Corned Beef and Cabbage, Fish and Chips, and a decadent Shepherd’s Pie.  The have dessert, too (though I can’t imagine ever having room to order any!).

If you’re looking for a fun, lively spot to watch international soccer with a great beer and whiskey selection and an impressive, Irish-accented menu, check out Fadó.  You’ll probably see us there!

*We came in fourth out of twenty-something teams, even though ours only had three members!  Somehow, all the questions were about the Beatles, Bob Dylan, and existentialist philosophers.  If only there had been a Gone with the Wind category, we would’ve totally destroyed the competition!