Last Friday, we unwound at El Mercado Uptown, where I feasted on these sour cream cheese enchiladas with refried black beans and rice.

It had been a long week, and, in an effort to branch out, I also had a tequila.  I didn’t finish it. 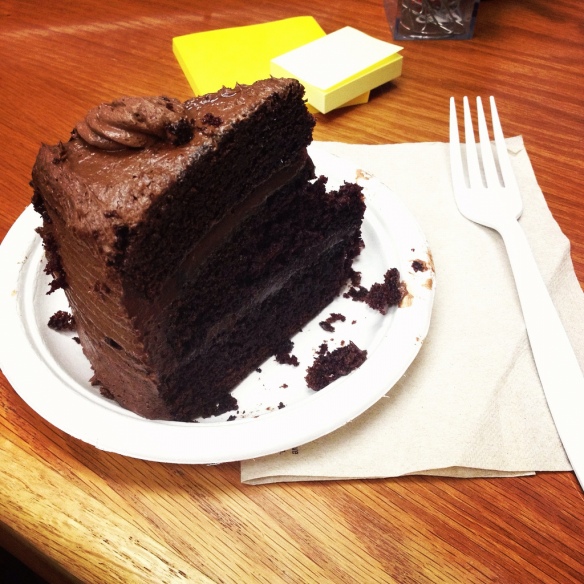 Then I got to work and found this waiting for me!  Apparently, my boss got a piece of chocolate cake at Jester and couldn’t finish it.  That’s right; originally, this piece of cake was twice as large. 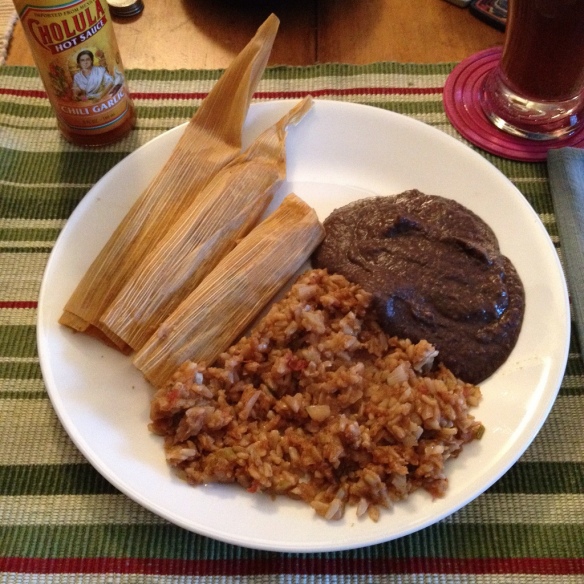 Homemade rice and beans with bought pork tamales. My sister-out-law says the beans look like poop.  May be, but the joke’s on you, ’cause they were DELICIOUS.  If their poopy appearance means there’s more for me, this may be a brilliant strategy…

My friend Marisela stealthily dropped off this sample of her homemade challah last Friday night! I went in the bedroom to talk to my mom on the phone, and when I came back, it was on my dining table!  Score!  I forgot to take a picture until after Eric and I had already eaten part of it.  Oops!  Free challah deliveries always welcome. 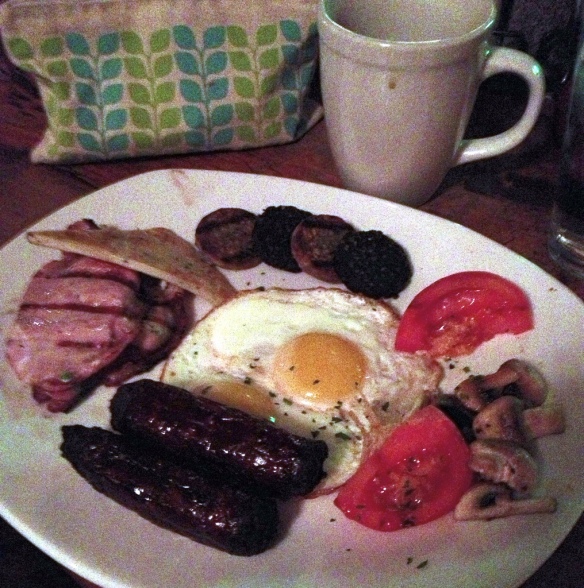 Full Irish breakfast at Fado. Sorry about the poor quality on this one; it’s pleasantly dark in there.  The egg, sausage, and puddings were amazing; the “fried toast” was a single pita crisp; the tomatoes were undercooked (for a “Full Irish” – plus I hate tomatoes, but can stand them blackened, as is typical); the mushrooms were anemic; and the bacon, while European-style, was a little tough (and, of course, I prefer American-style crispy bacon, like any sane person).  Overall, this was a bit disappointing considering the $14 price tag (yes, seriously), but Liverpool won, so it all worked out.  And Luis Suarez watched me eat.

The “Batini” – a vodka martini – at the Driskill Bar, where we watched the first half of the Texas-Oklahoma State game.

The Driskill’s bacon-wrapped medjool dates: to-die-for, and only three dollars during happy hour.  A steal!

Since I signed up for TunnelBear, I’ve been watching the past seven years’ worth of Time Team; Location, Location, Location; After You’ve Been Gone (Eric’s favorite, ha!); What Not to Wear; some BBC News; and, yes, live, real-time Downton Abbey (I’m telling y’all, you’ve got to get this thing!).

Feeling extra nostalgic, I decided to do a British Sunday roast lunch last week.  Sadly, my Yorkshire puddings turned out flat (I used gluten free flour because I forgot to buy any regular flour, I used cream instead of milk because I forgot to buy milk, and I made so much batter that I should’ve really used an additional egg), but the rest of the meal was fantastic!  I made roast beef with onions, carrots, and parsnips, along with separately-roasted Brussels sprouts and potatoes (my favorite part!), peas, and gravy.

Here’s the proper Yorkshire puds recipe, along with photographic evidence that I can actually make them.  Ha! 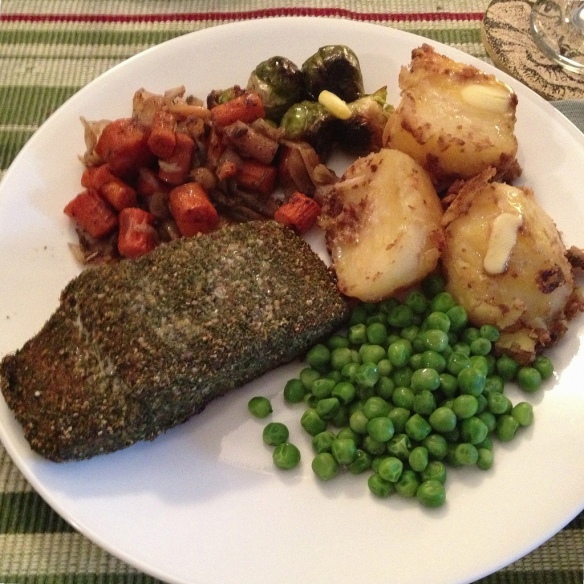 To celebrate this cool weather (and by “cool,” we mean, highs in the high 80s and lows in the mid 60s), we went to our friend Tim’s house for a whisky tasting with him and his girlfriend Lisa.  Not only did we drink all of these delicious whiskies, but we also listened to some Tom Petty (Wildflowers), a lot of Otis Redding, “Smells Like Teen Spirit,” and most of Led Zeppelin IV.  As you may have already surmised, it was an awesome evening. 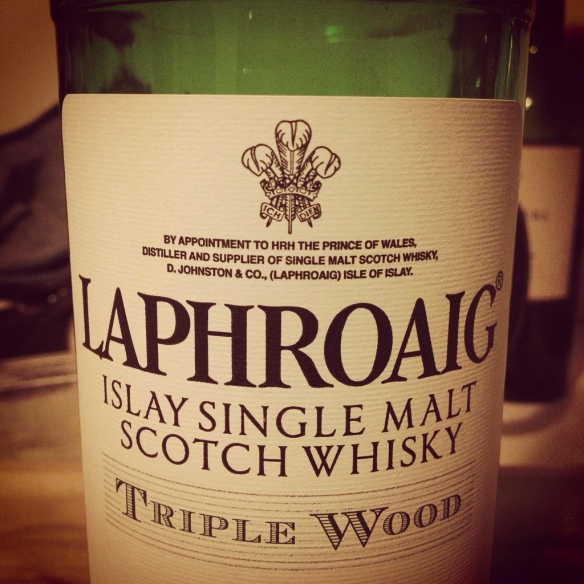 The Laphroaig was in a class all its own, and thus gets its own picture.  And it’s really in another class.  Check out that royalwarrant, yo!

Continuing with the alcohol/awesome boyfriend theme, Eric got me a four-pack of Samuel Smith’s Taddy Porter, which may be my favorite beer (certainly, if we’re taking regionalism and product design into account).  Sadly, the Tadcaster brewery no longer offers tours, but I’m going to start harassing them now in advance of our trip to the UK next summer.  Meanwhile, drink some of this; it’s fantastic.  I also recommend their crisp and tasty organic apple cider.

For the first presidential debate, we went to our friend Alice’s house with our other friend Alex.  It was a potluck: Alice made her signature Iranian rice and grape dish (whose name I can neither remember nor spell); Alex brought some green beans with almonds; and I made a potato salad (with added peas and some Old Bay). For what it’s worth, Charlie wasn’t impressed with either candidate. 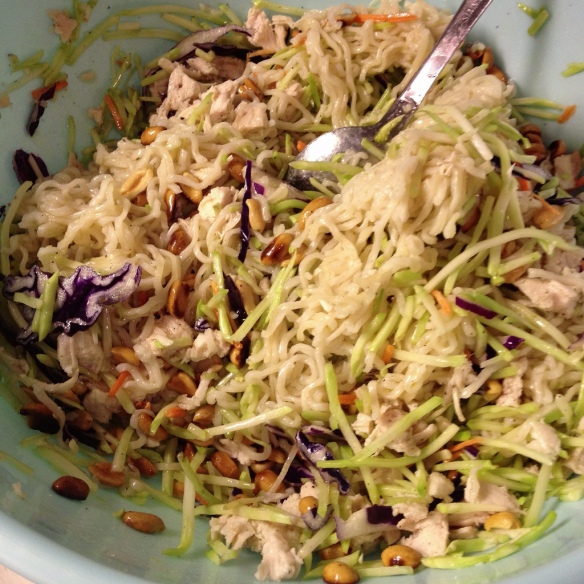 My friend Tedrah clued me in to this amazing cheap, easy, and addictive recipe for ramen chicken salad.  I make a huge bowl of it every few weeks to have on hand for weekday lunches and late night emergencies.  I use a bag of broccoli heart slaw for the slaw component, because I like it.  I rarely have green onion, so I leave that out, and I use peanuts at Tedrah’s suggestion (this time, I toasted them, and that really took it to the next level!).  I also use olive oil and apple cider vinegar in the dressing, and I go a bit light on the sugar.  Good thing I still have a couple of portions in the fridge, because writing this has made me crave it again!