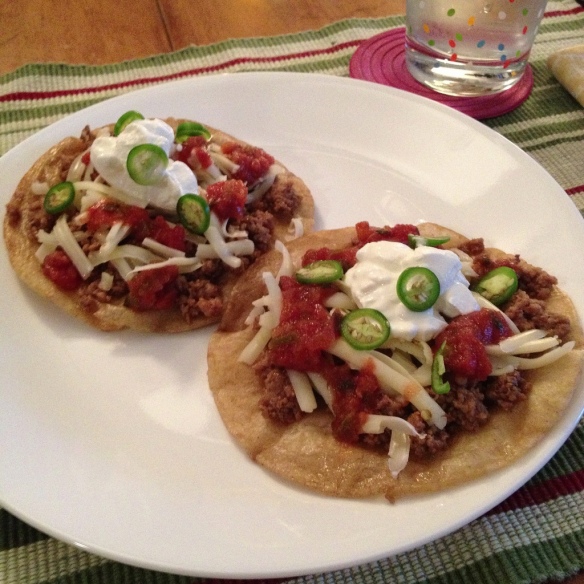 I made these delicious turkey tacos this week! Y’all should try them! I simply substituted ground turkey ($2.81 per pound at Wheatsville!) for the beef in my dad’s taco recipe, and topped them with shredded pepper jack cheese, salsa roja, homegrown jalapeños, and sour cream!  I fried these El Milagro tortillas blancas in a small pan with a little butter until just crispy, but still foldable, but you could use flour tortillas, or make tostadas.

In addition to the Creamy Jalapeño Rice I posted yesterday, I also made some baked chicken and sautéed squash. For the chicken, I used four bone-in, skin-on chicken thighs, which I rubbed with bacon fat, olive oil, salt, pepper, and heaps and heaps of homegrown thyme (picture). It smelled so good in the oven! For the squash, I simply sautéed roughly chopped summer squash and half a red bell pepper in butter with a little salt and pepper until bright colored and cooked through. This was a hearty meal. But let’s take a closer look at that squash.

And here’s what I did with the leftover rice! I fried up some bacon, then deglazed the pan and reserved about a half teaspoon of bacon grease to sautée, along with a tablespoon of butter, the roughly chopped cremini mushrooms. I also threw in a little splash of dark rum for good measure, and the taste (and smell) was divine!

Another typical breakfast chez Stella! Bacon (YES I EAT A LOT OF BACON BECAUSE BACON), chicken and maple breakfast sausage (both from Applegate Farms, via Wheatsville), and my Perfect Scrambled Eggs.

Eric turned the debate on last night. So this happened. 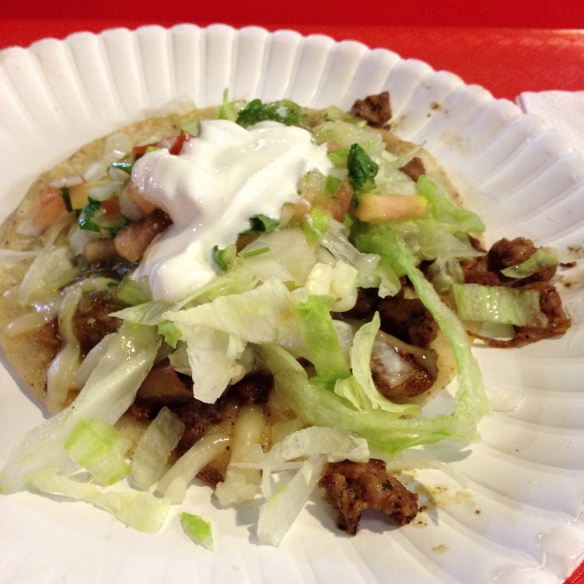 Well, we started with a taco, so let’s end with a taco! This was a quick lunch—my usual at Burrito Factory: the taco al pastor on corn tortillas, with salsa verde and sour cream.  Perfection!

By the time you’re reading this, I’ll be in Atlanta, Georgia, where I’m visiting my amazing and talented friend Morgan for a few days.

I’ve never been; but I read Gone with the Wind when I was ten and decided to do a Rhett/Scarlett scene in the elementary school talent show. I was half Rhett and half Scarlett, and turned to and fro to carry on a conversation with myself: a modified version of the stable scene.

I became obsessed with the film. I’ve seen it many, many times (I lost count around 100, when I was 17). So I’m excited to finally visit the Margaret Mitchell House on Peachtree Street. I re-read the book when I was in college, and I was shocked by the both the realism and the racism. I have decidedly mixed feelings about it now, and am very curious to see how I feel about Mitchell’s canonization in Atlanta. I’ll probably write about it when I get back.

I also plan to go to the Jimmy Carter Presidential Library, Martin Luther King National Historic Site, Atlanta History Center, and the Breman Museum. It’s also Texas-OU, but I don’t even know if I’m going to watch it, which will be a first!

Check back next week for a run-down of my food adventures in Atlanta!

And if you have any suggestions, leave them in the comments!