I can’t believe I haven’t written a whole post about the Dog and Duck Pub yet!

When I moved back to Austin from the UK in 2006, I chose my apartment based on proximity to the Capitol and the University (one of which I hoped to be employed by, both of which I have worked at in the past six years)… and Dog and Duck.

I’ve been a quasi-regular since 1998, when I was underage and enjoyed Cherry Cokes, fish and chips, and the Anglophile ambiance of the place.  Since moving into the neighborhood, I’m a fixture; the boy and I stop in at least twice a week on average.

Not only is the place cozy, unpretentious, and shockingly pub-like, but they also have the best staff in town, excellent food, a great jukebox, and an unrivaled selection of draught beers (about 40 at recent count, plus another 30 bottles and cans).

Rather than do a traditional review, I’m just going to present a photo essay of Dog and Duck’s greatest hits.

The bar.  See the current beer selection and specials here.  Don’t miss Tuesday pint night—all regular beers are on special, $3.00-3.50 per pint.  They also serve wine and a selection of soft drinks (free refills on the latter!).

Best fish and chips in town, hands down.  There’s a reason they regularly win the Austin Chronicle Restaurant Poll “Best Pub Grub” award!  Crispy batter, flaky white fish, lemon wedges, malt vinegar—served on a bed of expertly fried fries.  What could be better?  That’s right—nothing.  Available as a full or half order!

I am also a big fan of the lamb gyro.  This constitutes a light meal at Dog and Duck!  The tzatziki is cool and refreshing; the feta is crumbly and generous; and the lamb is perfect!  Succulent, flavorful, and a little crunchy around the edges.  I want one right now just thinking about it. 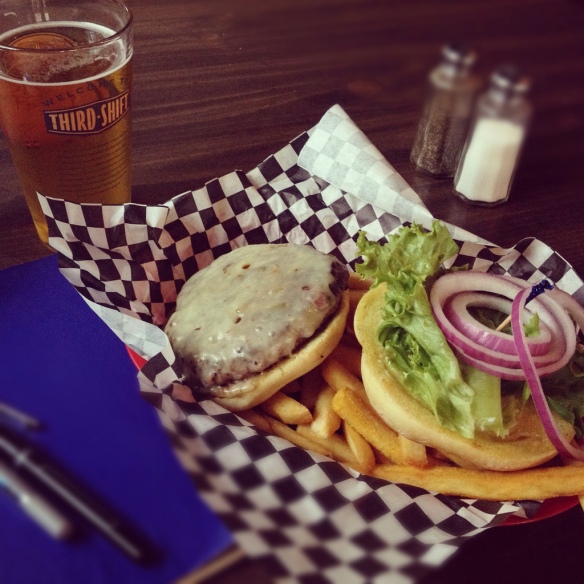 Though most famous for their fish and chips and other pub grub, Dog and Duck also has one of the best burgers in town, for my money.  I order a burger half the time, probably!  This is a standard cheeseburger and fries.  Their burgers are made from scratch; I don’t know the actual weight, but very often I suspect it’s a half pounder, because I can’t even finish it.  Eric and I actually split a burger and fries quite often.  They also have a really good veggie burger, which we order on occasion.

Dog and Duck is a great hangout for watching the English Premiere League; most games are on if they’re on air during their opening hours.  And they also have a dart board and pinball machine.  BYO chess, though.

Another classic British dinner: bangers and mash (I can’t believe I don’t have my own recipe up; must rectify that shortly!).  This is a huge, huge plate.  Don’t order it unless you are ravenous, plan to be there a long time, or have a friend to help!  It’s so good, though.  Three pan-fried sausages topped with onions and gravy, served with a scoop of mashed potatoes, a large side of baked beans, and two giant slices of Texas toast.  You can’t go wrong with this, mate. 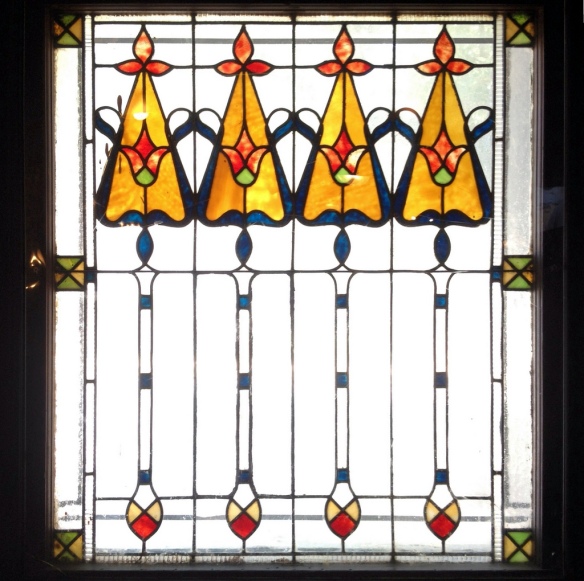 Didn’t I tell you the atmosphere is pretty nice? 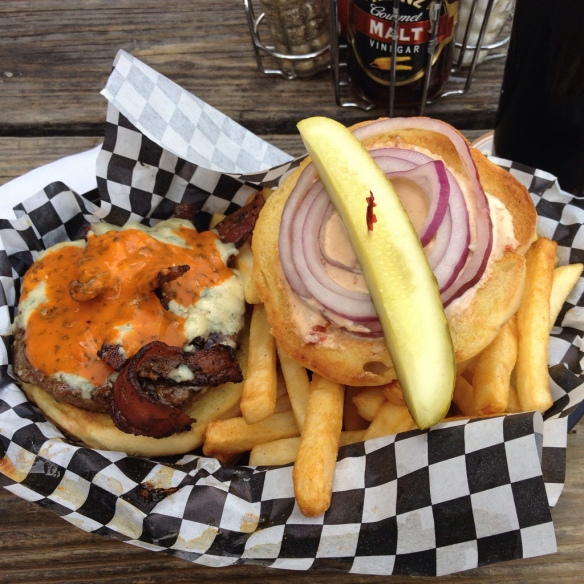 Here’s my favorite speciality hamburger: the Spicy Black and Blue Burger!  It comes with bleu cheese, bacon, and adobo sauce.  To.  Die.  For.

On the lighter side, you might also fancy a nice salad, like this Caesar with chicken.  The salads are large enough to make a whole meal, and are always fresh and tasty.  You might not think of this when considering lunch at the pub, but I highly recommend you try one!  They have several big, hearty salads on the menu.

Dog and Duck also puts on the largest St. Patrick’s Day party in Austin.  It’s an institution.  Here’s KUT’s beloved Ed Miller and the amazing Rich Brotherton on stage at this year’s celebration.  I have to say, though I enjoy this raucous day and night at Dog and Duck, I don’t understand why they don’t do anything for St. George’s Day, or have a regular EPL schedule.  Since they’re an English pub and all…  The place becomes Irish for one day a year.  It’s pretty funny.

Finally, they also have amazing lunch specials.  Many state and UT workers head over on their lunch break to take advantage.  I had this soup, salad, and sandwich combo last week with my friend Phillip: spicy potato and chipotle creamed soup; bacon, cheddar, and arugula melt on sourdough with onion and a sriracha sauce; side salad. Including a soft drink (free refills), it’s a steal at $8.50!  I already posted a closeup of the bacon sandwich in last week’s This Week’s Eats, but check it out.  This was the best bacon sandwich I have ever eaten in my life.

If this post made you drool, get on over there right now!  Today’s lunch special is a pesto turkey pita melt: grilled turkey with bacon bits, balsamic tomatoes, arugula, parmesan pesto spread, mozzarella, and Romano cheese on a toasted pita. Served with chips, fries, or lightly battered asparagus—$8.50!

You can find out about daily specials by liking Dog and Duck’s Facebook page, following them on Twitter, or checking their web site.  It’s usually announced on Facebook first.

Cheers, and see you there!