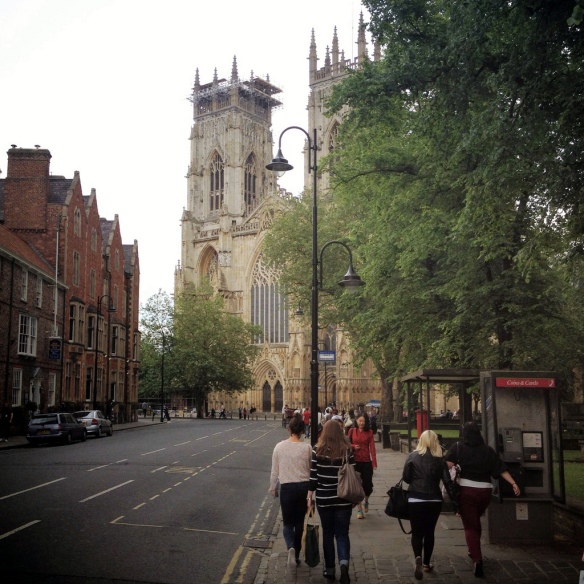 York Minster, the heart of the medieval city, historic capital of Northern England, and final destination of this post.

On day four, we rode the train from London to Doncaster, where we stopped to see friends, then on to York (my favorite place in the UK, and where I was lucky enough to go to graduate school). The onslaught of English comfort food was amazing. And the cool weather didn’t hurt, either.

Our stop in Doncaster included a private tour of the Mansion House, which was fascinating. Since the Doncaster City Council built a new chamber in the aughties, the Mansion House has become a historical property and event venue. They keep the rooms set up for banquets, to give you an idea of what it would be like to host your wedding or party there. 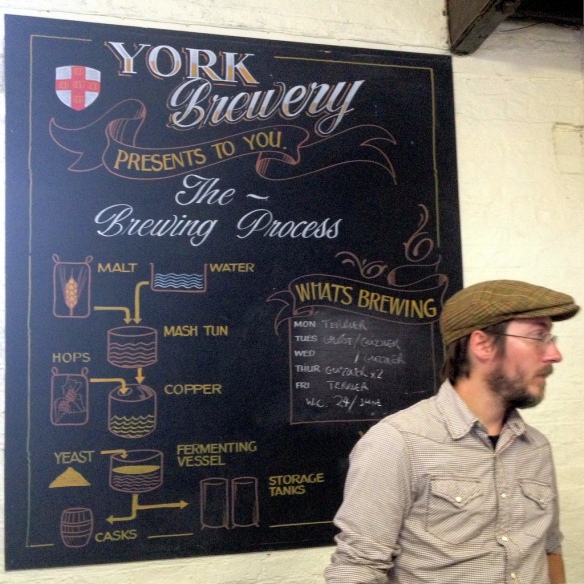 Our next stop: York Brewery. (That’s Eric. And he’s not wearing a Yorkshire costume; he always wears that hat!)

Operational since 1996, this local brewery produces a fine line of real ales.  We went on an afternoon tour—and tried them all in their cozy tap room! 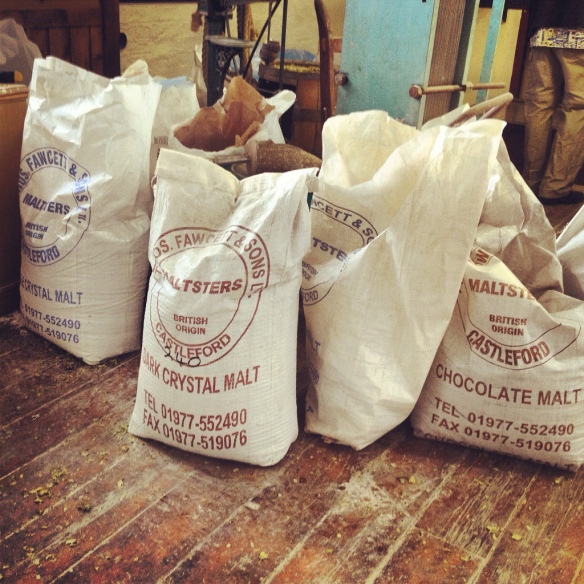 Our favorite was the Centurion’s Ghost Ale.  Mmm.  I loved this little half pint glass, too.

After the tour, we saved a few quid by popping into the nearby Wetherspoons pub (a chain) for a quick afternoon “dinner.”  I had the £7.00 bangers and mash; though this dish is no doubt from frozen, it still tasted prettttty good.  I have to admit here, I’m a sucker for potatoes-from-a-box.  Don’t get me wrong, I prefer freshly-mashed, homemade potatoes with real butter and cream; but I do love me some instant potatoes.

In York, we stayed at the Acer Guest House, just south of the city wall, a lovely, five-minute stroll from Mickelgate Bar. I highly recommend it.  Not only was our host, Karen, extremely helpful and gracious, but the place is immaculately clean and beautifully decorated, as well as quiet and relaxing.  Plus, the breakfast was excellent.  I could’ve stayed here for weeks. 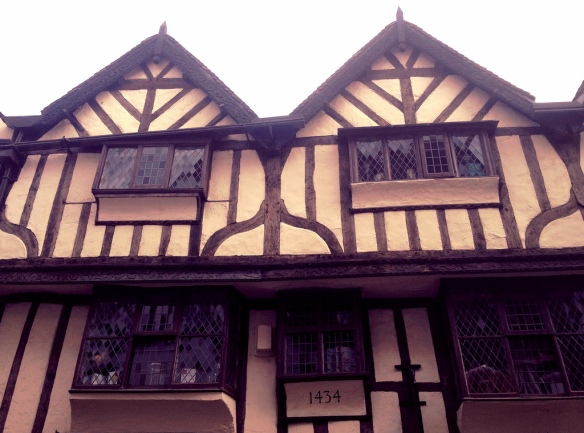 Shop window in Stonegate.  Look at all those Yorkshire ales!  Pretty much heaven.

Next stop: the Guy Fawkes Inn.  And this isn’t just a gimmick, folks.  It’s where the notorious Catholic plotter was born!  A stone’s throw from York Minster, his house is now an inn and tavern.  It’s super atmospheric, and the beer selection is great.  The food is good, too, though we didn’t eat here on this trip.

This busker is leaning up against St. Michael le Belfrey Church, where Guy Fawkes was baptised! 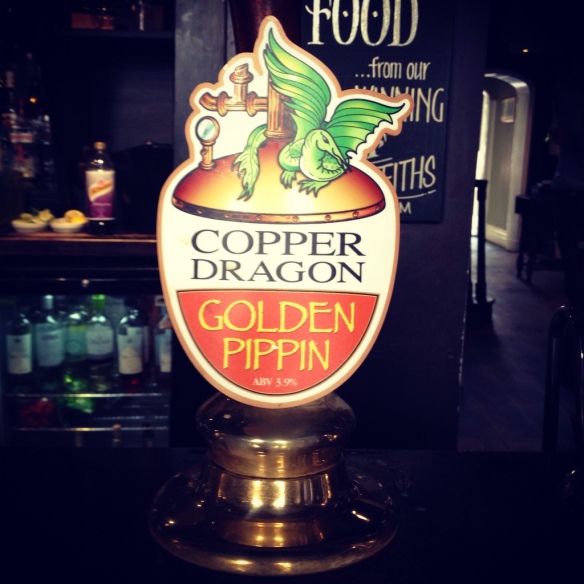 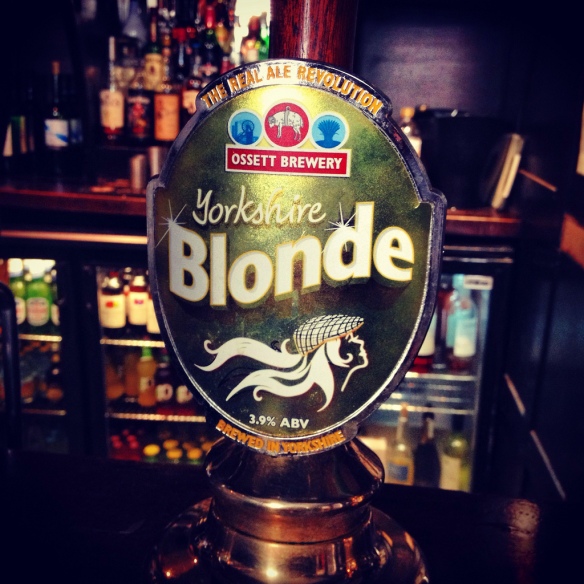 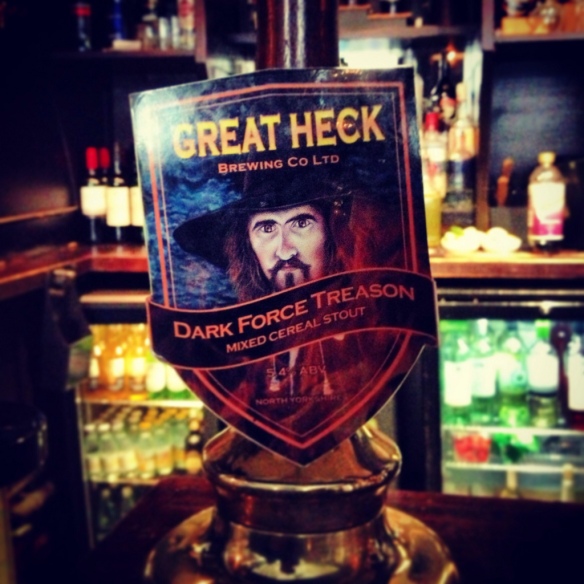 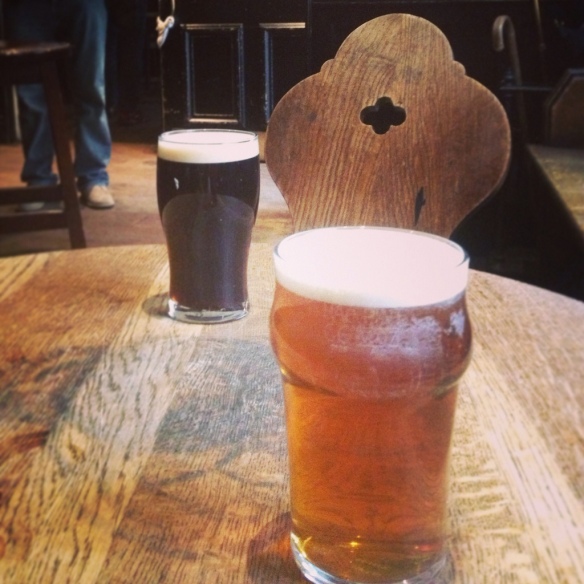 Another view of the Minster, just down the street from Guy Fawkes’ house.

We had a trip-highlight of a lunch at the Black Swan, one of York’s must-see pubs.  Built in 1417 (you read that right), this historic spot has authentic half-timbering, fireplaces of medieval brick, wood-paneled walls, portraits of stern Tudors peering at you as you eat your meal, and very, very good food.

Oh, and did I mention that the best thing about the Black Swan is that they serve Theakston’s?  Meaning I could have a big, imperial pint of Old Peculier (one of my top five favorite beers; probably top two) with my giant Yorkshire pudding.

Seriously, this thing was nine by thirteen inches!  And so delicious.  I can’t even explain.  Well—I’ll try.

It’s a giant Yorkshire pudding, made in a casserole dish (often they are round, just a larger version of a regular pudding; but this one, as you can see, was rectangular!).  Then it’s filled with a Sunday lunch: roast beef, onions, carrots, peas, and beef gravy.  You eat it with a knife and fork, sopping up the leaking gravy with pieces of pudding.  It is so good. 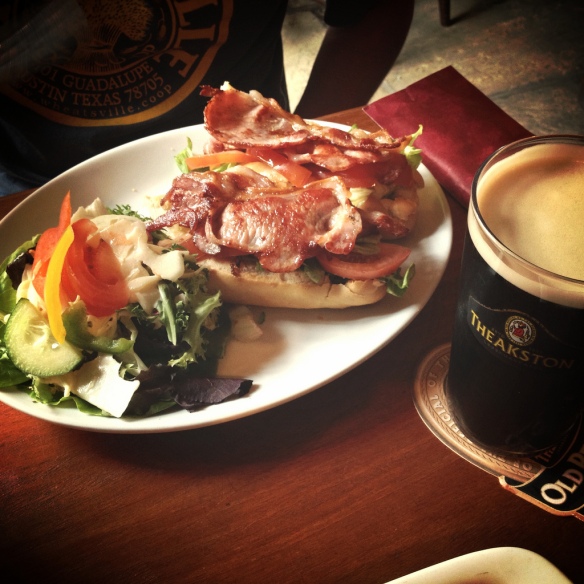 Read the history of the Black Swan here.

Next on our pub crawl was the first of two stops at the King’s Arms, conveniently located on the east quayside of the River Ouse, nestled right next to the Ouse Bridge.  This is a Samuel Smith’s pub (makers of the other of my top-two favorite beers, Taddy Porter), so there’s really nothing not to like.  Situated as it is right on the Ouse, it floods every year—sometimes more than once—and there’s a handy flood chart on the wall right inside the door.

Unfortunately, due to said flooding, the conditions in the cellars are quite unpredictable, and, therefore, the King’s Arms is unable to serve real ale (from casks).  They do, however, have an impressive selection of the aforementioned Samuel Smith’s served up from kegs.  When we were there, we counted no less than 12 brews available.  As Samuel Smith’s fans, this was amazing.  And there are other pubs in York, several of which we visited, that do serve cask Samuel Smith’s.  Here’s a map of all the Samuel Smith’s pubs in the UK.  Wowza.

The King’s Arms has lovely outdoor seating right on the River Ouse, but we chose to stay inside and soak up the atmosphere while writing postcards. 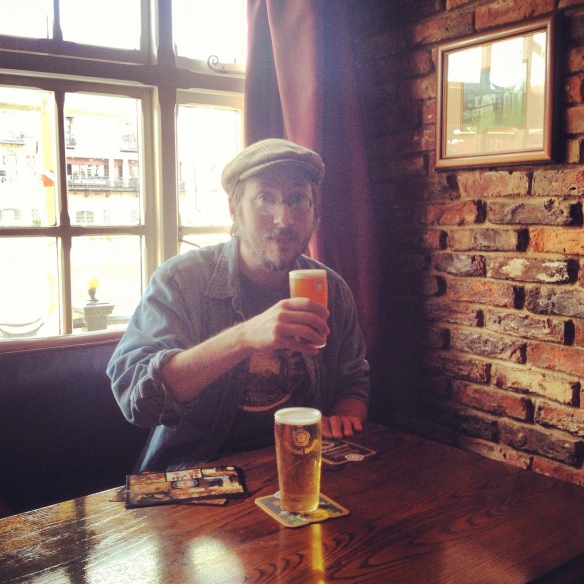 The campus lake at the University of York.  If you’re not already following the Duck of the Day because of me, YOU ARE NOW! 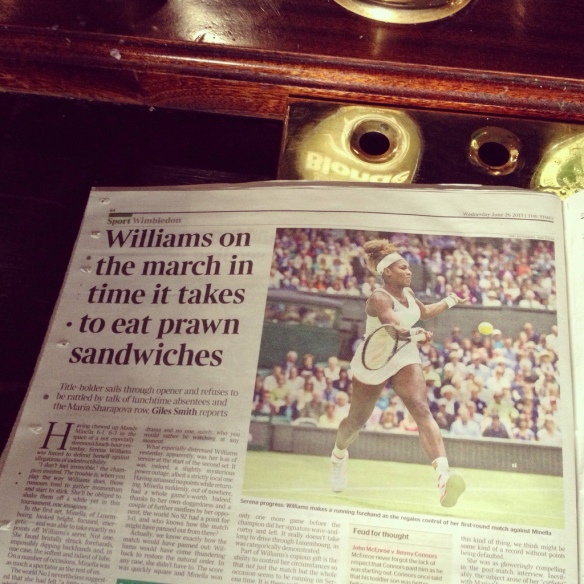 Another pint, another pub.  I don’t even remember which one this was, though it was inside the historic medieval center.  We went to about ten pubs in York over two days.  And there are still several I want to take Eric back to visit! 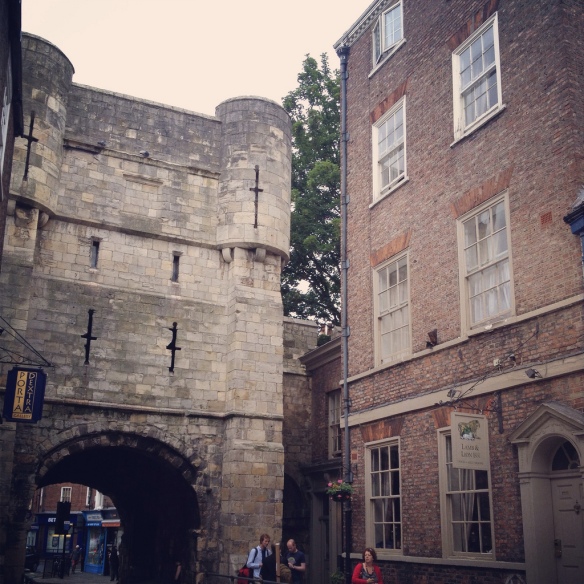 Also highly recommended is the Lamb and Lion Inn (above right), a 17th century building tucked right next to Bootham Bar and in the shadow of the Minster.  They also have great food. 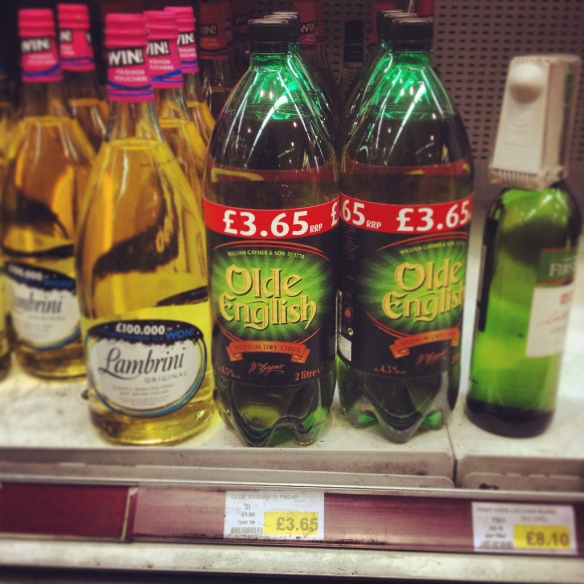 Late night Sainsbury’s run.  (We didn’t buy this.  We were there for the cheese and onion sandwiches.)

The Minster Inn is a neighborhood Marston’s pub in an Edwardian building on Marygate, just outside the city wall, where we enjoyed a couple of pints in a tiny, secluded back garden.  This is a great choice to get away from the throngs of tourists, and they serve real ale, to boot.  I had the Marston’s Oyster Stout.  Mmm.  Ale.

So, maybe we spent more time sampling local ales than eating food while in York…  Priorities.

Me and e. on the River Ouse at sunset. ❤

Those are just the food and beer pics.  To see how beautiful York really is, check out my Flickr set. 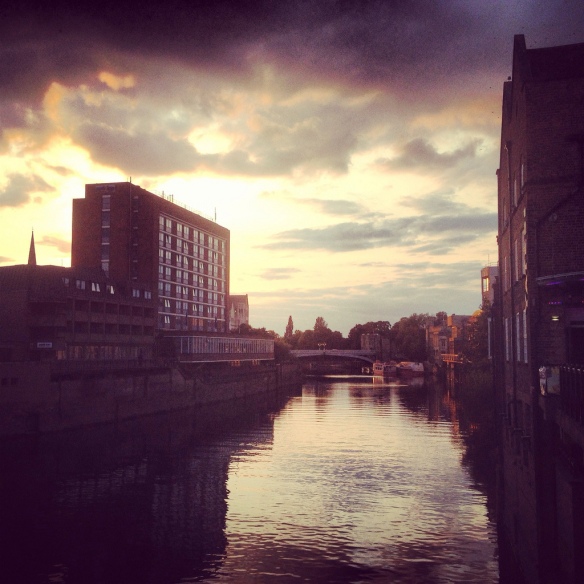 Sunset on the River Ouse.

This is the second post in the Great British Food Series.  Read Part One, London and Brighton.