We spent four nights in Edinburgh, but on day two in Scotland, we hopped back across the English border in a runaway shuttle bus, on a little castle and coast tour. 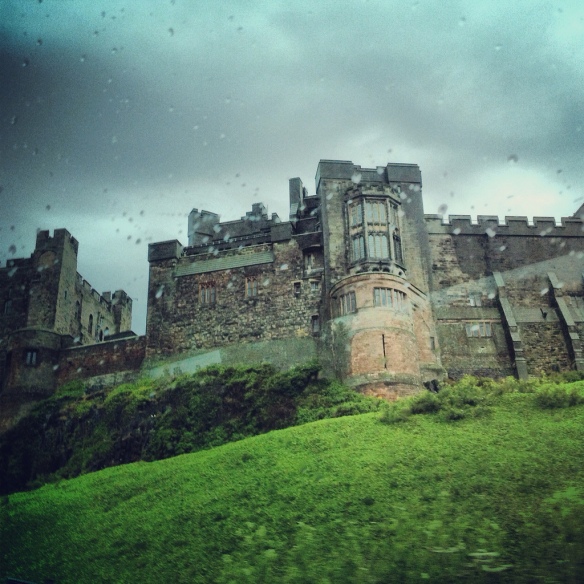 Bamburgh Castle, perched on the Northumbrian coast, overlooking the North Sea.  Quite the windswept, romantic spot, as you can see.

We also went to Alnwick, but, since we’re not Harry Potter fanatics, we skipped the £14.50 tour and spent two and a half hours in a pub. 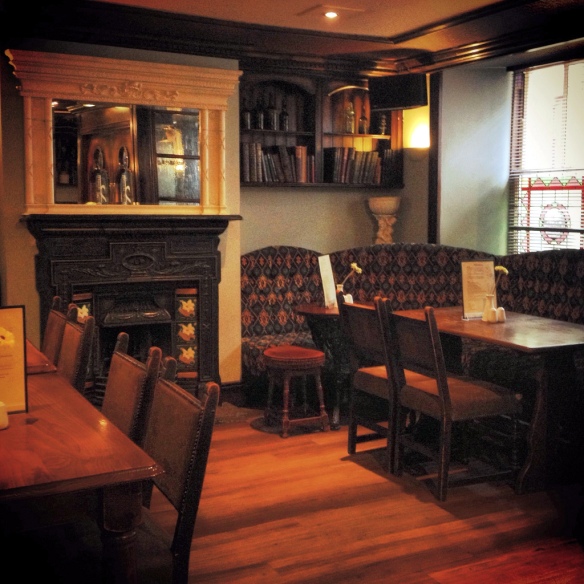 Eric had roasted leek soup.  It was really good.

I had steak and ale pie; it was deconstructed, and one of the very best beef pies I have ever had. 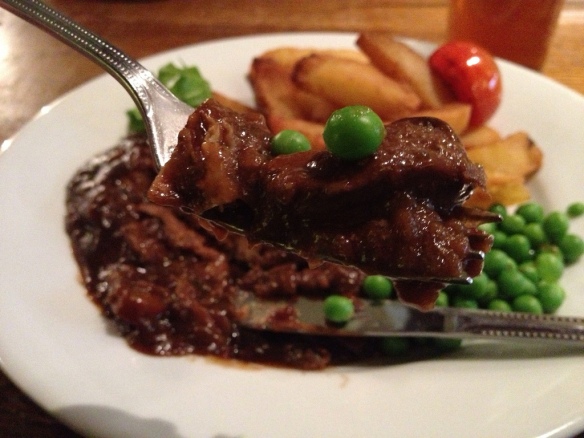 A pint of Worthington’s.

Our final stop on the tour, and the real reason we went on it, was Lindisfarne.

Have you been watching Vikings, the new series on the History Channel?  The Vikings’ arrival in England in 793, at Lindisfarne, was fresh in our mind, thanks to the show.  I’ve always wanted to go there, but because of its remote location, I never made it while I was living in England.  Eric is also a history buff, and was fascinated by the story of the Anglo-Saxons “first contact” with the Vikings, so this was a real highlight of our trip. 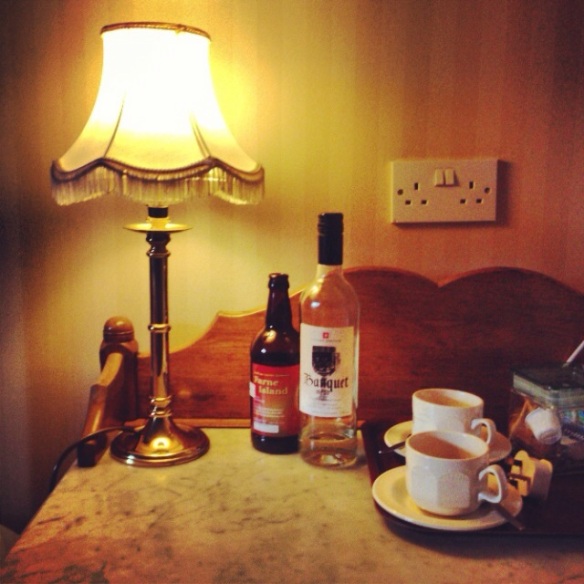 We also bought some mead on the island!  A bit sweet for regular consumption, it made a nice birthday dessert drink back at our Edinburgh B&B.

Our next stop was Liverpool. 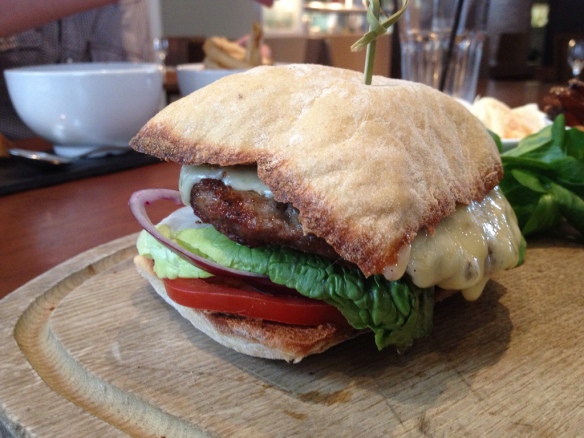 Upon arrival, it was too early to check into our room at the Heywood House Hotel, so we decided to try the attached restaurant, The Bank Bar and Brasserie, owing to its convenience and positive reviews.

It was passable, but overpriced.  The cheeseburger above was from frozen, and the bun was burned. 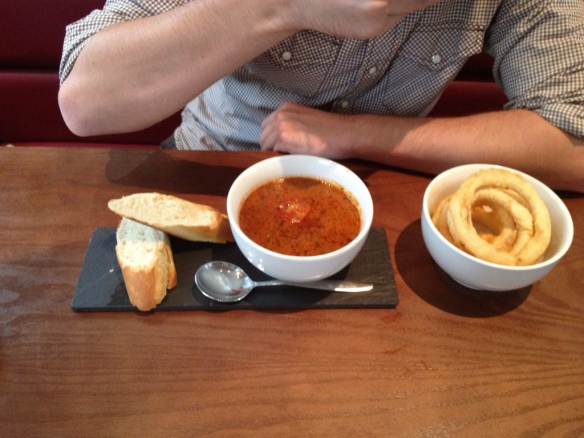 Eric’s tomato soup was just okay.  The upscale, urban atmosphere of the place was great, but the food disappointed.  I supposed our first clue should’ve been that we were the only patrons at lunch time on a weekday in the center of Liverpool. 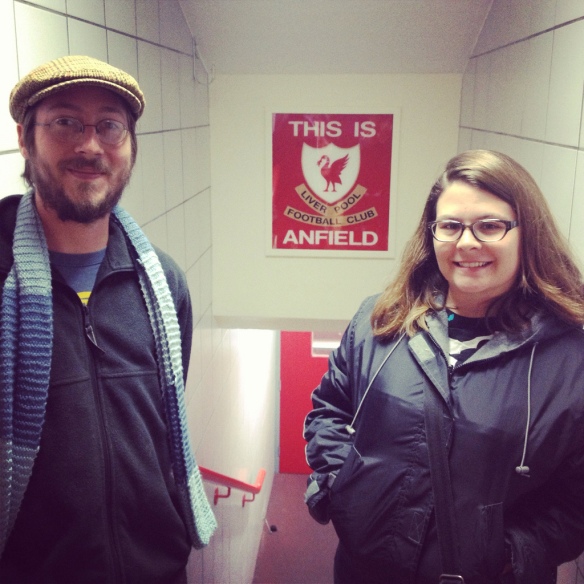 As you may recall, I am a bit of a Liverpool FC fan.  So, of course, we went to Anfield. 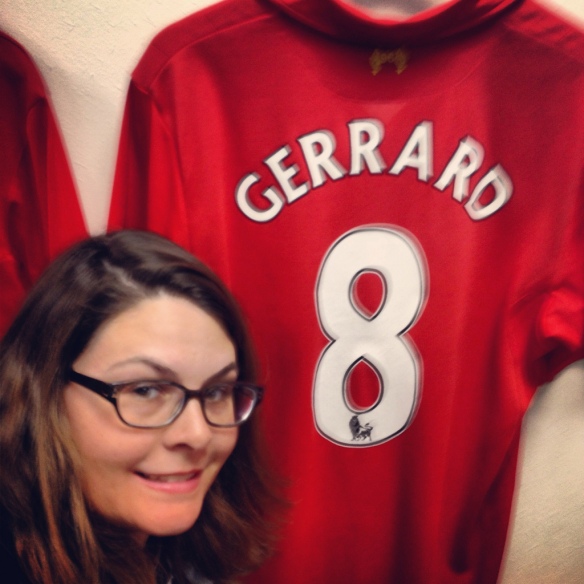 Eric was tired.  We had large coffees in the Anfield Boot Room Cafe.

Though I was very tempted to order this:

After spending the day exploring Liverpool on foot, we ended up at Thomas Rigby’s, near our hotel, for dinner.

I had the last of many steak and ale pies.  I suspect they’re not even making full pot pies anymore, because I didn’t see a single one the entire time we were in Britain.  This is another “descontructed” one.  It was very good, too!  This was a great little spot.

That’s it for the road trip portion of our UK adventure.

I’ll be back soon with a final post featuring a few more London noms, and then it’ll be back to your regularly-scheduled taco-related programming.