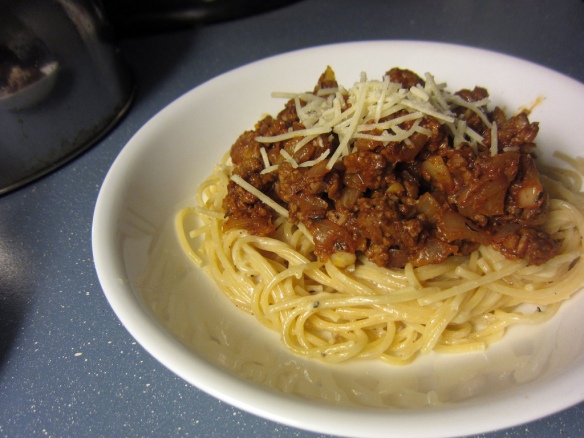 So, I had a pound of beef, some pasta, and no idea what to make for lunch during the Ravens-Texans game (go, Ravens!). I hadn’t had Bolognese sauce since living in England more than five years ago, so I decided to give it a try. Pasta Bolognese seemed to be the most popular Italian dish in the UK a few years back, and it was on every Italian menu, as well as a lot of pub menus, not to mention available in frozen form at the supermarket! This Bolognese, while fairly straightforward, is far superior to the Tesco version. I will definitely be adding this one to my regular pasta rotation.

This classic sauce was registered in 1982 by the Bolognese delegation of the Accademia Italiana della Cucina and stipulates the ingredients as: beef (skirt steak), pancetta, onions, carrot, celery (stalk), tomato paste, meat broth, red dry wine (not bubbling), milk, salt and pepper to taste. There are, of course, multiple regional variations, however; let’s consider this the variazione del texan.

For this recipe, I cheated on on the soffritto, skipping the carrots altogether, added some spices I had on hand (an idea I got from Emeril Lagasse), and left out the pancetta (since I didn’t have–or want–any). I also used spaghetti instead of tagliatelle, a typically American modification (though I love tagliatelle!). Finally, I served the sauce on top of the pasta, which I mixed with the cream and butter, rather than mixing it all together as the Italians would be more likely to do. Eccola!

1. Add olive oil, beef, onions, garlic, salt, and pepper to a large skillet and stir over medium heat until just cooked through, breaking up the meat with your spatula.

2. Meanwhile, bring a large pot of salted water to a boil and cook spaghetti until al dente, about 10 minutes.

3. As meat cooks through, add herbs and spices. Reduce heat to medium low. Add tomato paste and stir thoroughly. After about three minutes, as tomato paste is absorbed, add wine. Stir again and allow to simmer until alcohol is cooked off, about five minutes. Finally, sprinkle with sugar and stir again. You can cook this sauce for as long as you want, actually – just keep adding water and reduce heat to a simmer. It will become richer with every minute cooked.

4. Drain pasta and return to pot, away from heat source. Add butter, cream, and pepper, and stir thoroughly. Add half the parmesan and stir again, until cheese is absorbed into pasta.

5. Spoon spaghetti into pasta bowls and top with generous heaps of the beef sauce. Garnish with remaining parmesan, and serve immediately.

Serves 4-6, either as one of several courses, or as a main or single course.

Sauce refrigerates well for up to five days. 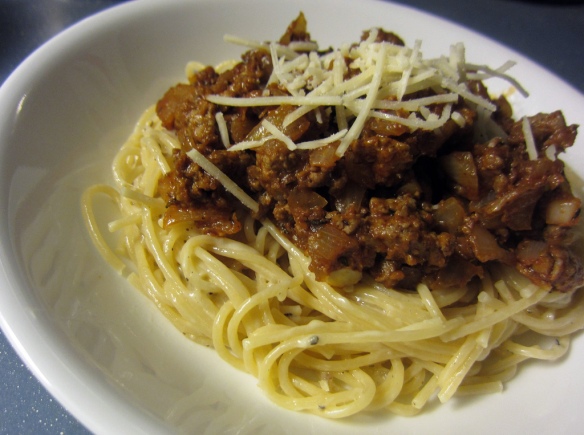 Tom Cruise gave me this recipe.

No, seriously. One day in 1996, I was watching Oprah. I always watched Oprah. In 1996, my schedule went like this: school, tennis, Route 44 Dr Pepper, batter crumbs from Long John Silver’s, Oprah.

In 1996 I was also obsessed, along with my pal Morgan, with Interview with the Vampire.  I lived within walking distance of the movie theater, and we went to see that movie at least four times.  To add a tangent to a tangent, this film also marked the beginning of the Brad Pitt Obsession of 1996.  Once, we made Morgan’s mom go to the local video store and check out every Brad Pitt movie they had.  I should probably apologize for that now.

Anyway, to promote the film, Tom Cruise appeared on Oprah.  And he shared his pasta carbonara recipe with her.  Don’t believe me?

That recipe always stuck with me, and one recent weeknight, very hungry but at a loss for dinner ideas, I decided to make Tom’s carbonara from memory.  Of course, as with most recipes I adapt, the only substantial changes here are the substitution of shallots for Tom’s onions, and the addition of cream.  Oh, and I used linguine – but you could use whatever pasta you have on hand.

And, don’t forget: the vampire Lestat revealed that his kind are not really affected by garlic, after all.  So put plenty in there!

1. Bring a large, salted pot of water to a boil. Add pasta and stir thoroughly.

2. Meanwhile, in a separate skillet, fry bacon in olive oil over medium heat until done and crispy. Set aside.

3. Skim some of the bacon grease out of the pan (you will probably have too much); drain and refrigerate for later use. Using about 1 tsp of remaining bacon grease, reduce heat to low and sauté the shallots and garlic for about two or three minutes, until fragrant. Do not burn.

4. By now, your pasta should be done (cook approximately 6-7 minutes, or follow package instructions for al dente). Drain and return to pot. Stir in the shallots and garlic. Crumble bacon into pasta in small pieces. Crack two eggs into the pot, add pepper, and stir thoroughly. Cover and set aside for 3-4 minutes. The heat from the pasta will cook the eggs.

5. Once the egg is completely cooked, remove the cover and stir in cream and half the parmesan. The mixture should be rich, but still fairly light on the pasta.

6. Serve immediately, garnished with a dusting of extra cheese. Black olives are also a favorite at my house (as pictured).

I’d been looking forward to it for weeks—no, months.

Inspired by previous loosely-themed dinner parties with a couple of friends, Eric and I headed over to the Windsor Park neighborhood one warm Thursday evening to enjoy a menu of which Paula Deen would most certainly approve.

Our gracious host started the evening off with a round of fancy jalapeño cocktails. While I didn’t take note of his top secret recipe, it was something like this, with rum and sugar. Refreshing, with just a little kick. Okay, okay – so the cocktail didn’t include butter. Stick with me here.

While we settled in for what turned out to be a marathon night of many small, artful courses more worthy of Andalucian lingering than Austin mouth-shoveling, our hostess brought out an appetizer I’m still salivating over: homemade radish butter with pumpernickel. It was rich, fresh, a little salty, and absolutely addictive.

Then we moved on to Eric’s homegrown salad, with freshly-picked mixed leaves, mint, oregano, basil, homemade croutons, cherry tomatoes, and (from Wheatsville) grated parmesan, Kalamata olives, and toasted pecans, all topped with a dash of olive oil and balsamic vinegar.

This was enjoyed with a cup of my reheated Squash Soup, which included a generous amount of butter.

The next course was the One That Changed Everything. My first serving of fresh, homemade pasta. Yes, I am serious. Luckily for me, the cook is bit of an expert on all things Italian, and Eric and I were happy to reap the benefits of the time he’s spent in both Italy and Sardinia, as well as, apparently, the kitchen. This pasta was amazing. Since it’s about 300 degrees in Texas right now, and the pasta was so fresh and delicate, we didn’t ruin it by drowning it in sauce or weighing it down with heavy meats or strong flavors. Our hosts have the enviable problem of a rather profusive sage bush that’s growing in their front yard, so they just browned some butter, fried the fresh sage in it, and poured that over the homemade fettuccine with a quick shaving of parmesan. Squisito.

I’ve got to make this.

For dessert, we had ice cream bars and Scotch on the deck. And, despite all this butter-based indulgence, we weren’t even stuffed; spreading the many small courses out over a whole evening made for a sustained appetite and some great conversation.

I think Lucky Cat was a little jealousl

This was another quickly-thrown together, end-of-the-month, empty-cupboards kind of meal – but it turned out blog worthy!

Maybe you’re not the kind of person who has frozen bison sausage lying around… but, then again, maybe you are.

1. Start with the sauce: in a large stock pot, melt the butter and olive oil over medium heat, stirring in garlic and onions. Allow to cook for about three minutes, until fragrant. Pour in tomatoes, smashing them with your spoon or spatula, and stir well. Sprinkle in herbs and some salt and pepper. Allow to cook for approximately 20 minutes, stirring occasionally, and continuing to mash up tomatoes to your desired consistency (I like mine fairly smooth).

2. Meanwhile, bring another large, salted pot of water to a boil. In a skillet, melt butter and olive oil, and add whole sausages. Cook over medium heat for about 15 minutes, until nicely browned and cooked through, then remove from heat and slice into approximately half-inch pieces.

3. Once pasta has cooked al dente (approximately ten minutes) drain and return to the pot. By now, your tomato sauce should also be done, so it can be poured directly in over the pasta; stir well, adding more salt and/or pepper to taste.

4. Spoon pasta out into bowls, topping each with a sprinkling of cheese (about 1 tablespoon per serving, or to taste), add your sausage pieces, and garnish with chopped basil. Serve immediately. 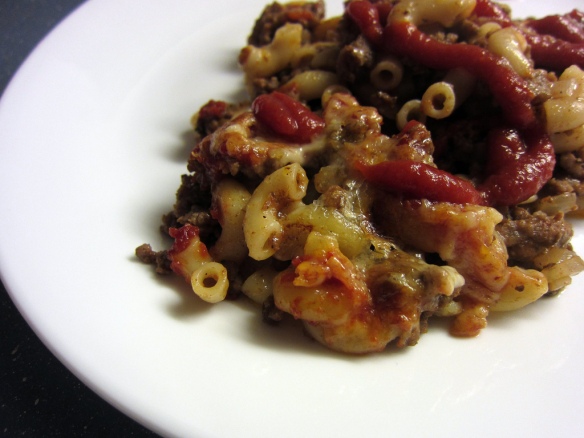 This is a slightly updated version of – you guessed it – my dad’s Roman Holiday. A staple of my childhood weekends, this recipe is definitely unpretentious, easy, and filling. For me, this mixture of beef and macaroni is a real comfort food, and it’s a great choice for those “what to make for dinner?” week nights, bare-cupboard ends of the month, or anytime you need to whip up a hearty meal quickly. I hope you enjoy it as much as my dad and I do!

1. In a large skillet, saute onions, bell pepper, and garlic in olive oil over medium heat for about three minutes, until the onions begin to become translucent. Meanwhile, grease a 1.5 quart baking dish and set aside. Preheat your oven to 350°F.

2. Increase heat to medium high and add ground beef to the pan, breaking it up with your spatula and folding in the onions and peppers. Cook for about five minutes, continuing to stir occasionally. Meanwhile, mix up the seasoning sauce ingredients in a 2 cup measuring cup, stir thoroughly, and set aside.

3. Add liquid seasoning mix to the pan and stir thoroughly. Cook beef for approximately ten minutes, until a good amount of the liquid has been absorbed / cooked off. Meanwhile, in a medium saucepan, bring a quart or so of salted water to a boil and cook macaroni for about five minutes, until al dente. Drain and add to beef mixture, stirring thoroughly so that pasta is evenly distributed.

4. Pour your beef and macaroni mixture into the greased pan and toss in fresh oregano and basil. Squeeze some ketchup out over the top in a lattice-work pattern, and top with grated cheese. Bake for approximately 20 minutes, or until the cheese begins to bubble and brown. If a crispier result is desired, broil for a couple of minutes at the end of cooking.

5. Remove dish carefully from oven and allow to cool for a few minutes on the stove top before serving. Spoon the dish out onto plates and top with more ketchup if desired.

This dish is even better the next day, so be sure to refrigerate your leftovers! It makes a great leftover lunch for workdays, too – it just needs a quick reheating in the microwave.