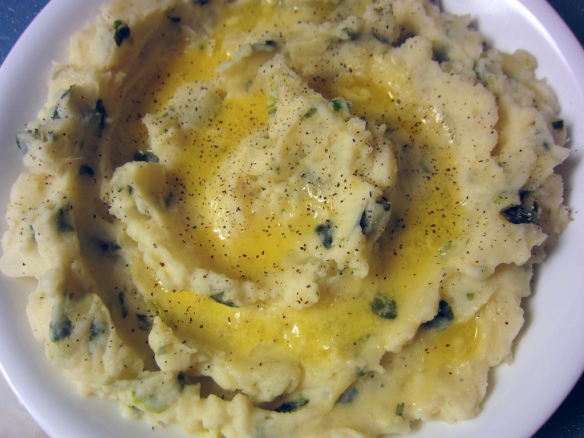 Did you ever eat Colcannon, made from lovely pickled cream?
With the greens and scallions mingled like a picture in a dream.
Did you ever make a hole on top to hold the melting flake
Of the creamy, flavoured butter that your mother used to make?

The Queen planting a tree in Ireland.

Well, it’s the Queen’s Diamond Jubilee, and I am a hardcore Anglophile, but I just couldn’t help whipping up some delicious Irish comfort food this week, so that’s what you’re getting! Hopefully, as heralded by Her Majesty’s recent trip to the Emerald Isle (the first by a reigning British monarch since her grandfather King George V visited in 1911), relations between the two countries will continue to improve. Meanwhile, we can all enjoy the best, butteriest foods from both windy isles.

1. In a large stock pot, cover potatoes with water, lightly salt, and bring to a boil. Cook for about fifteen minutes, or until fully softened.

2. Meanwhile, heat bacon in a large skillet over medium low heat. Allow to sizzle for about ten minutes, turning occasionally, until nicely browned. Drain on paper towels, crumble, and set aside.

3. In a medium stock pot, cover cabbage and spinach with water and bring to a boil. Allow to cook for about five minutes, until cabbage begins to darken, and add a pat of butter. Stir and cover. Boil for a further ten minutes, then drain and set aside.

4. Once potatoes are cooked through, drain and return pot to stove. Lower heat to simmer and add about half the remaining butter, plus salt and pepper to taste. Mash until potatoes are as smooth as possible, slowly drizzling in cream. Taste, and add more salt and pepper as desired. Add the cabbage and spinach, along with the rest of the butter, reserving four pats. Stir thoroughly so that all ingredients are evenly mixed.

5. Serve immediately by ladling the colcannon out into bowls and smoothing the top with the back of a spoon. Add reserved pats of butter, one per bowl, and allow to melt into the grooves created by the spoon. Top with crumbled bacon, chopped spring onions, and additional black pepper, if desired.

Serves 6. Also makes great leftovers. Just throw a pat of butter on there and reheat!

Yeah, it’s shocking to me, too.

I thought I would be vegan for the rest of my life.

But in recent conversations and blog discussions, I have been forced to confront some of my own assumptions and values, and I no longer believe that the vegan diet/lifestyle is the most sustainable.

I suppose, to sum it up in a sound byte, I have come to the conclusion that the main motivation for my diet is sustainability, and that eating fossil-fuel-dependent, industrially farmed tofu (and other proteins, grains, and indeed vegetables) is far less sustainable than eating locally raised, organic, sustainably farmed animal products (and vegetables).

I know this will anger the few vegan readers I have. I’m sorry. We have come to different conclusions, either through having different information or because we interpret the information differently. But I can no longer ignore the fact that whole ecosystems are being destroyed for my industrially farmed diet. Oil is being extracted violently from the earth to fuel these massive operations, and to transport these foods thousands of miles to my table. These are not compassionate actions. On a macro level, they are far less compassionate than slaughtering a free range, naturally-fed, sheltered, and cared for farm animal.

I will be doing everything I can to eat local produce. I shop almost exclusively at Wheatsville Food Co-op as it is; I will be making use of their local, traditionally farmed vegetables and animal products. I can only encourage others do to the same.

While I am aware that there is not enough land to support all 300+ million Americans – much less 6+ billion humans – on this diet, it nevertheless remains a fact that we cannot all be fed on industrially farmed soy and wheat, either. There are simply too many people. And, pooh-pooh me all you want, but I do believe we are headed for some kind of crash. Within most of our lifetimes, oil extraction will no longer be cost effective. Without oil, industrial agriculture will fail.

So, as before, I am making decisions from a place of compassion and concern for the planet. I will continue to fight against factory farms, which are killing us with their chemically-soaked pseudo-meats while relegating billions of animals to a life of torture followed by an excruciating death. All for profit. This is unacceptable.

In coming to this decision, I also realized I was making the mistake that is a feature of so-called religious logic, and one that I constantly bemoan. I started with a moral declaration and then sought to justify it: killing is always wrong. But the proper approach to the question of an appropriate human diet is simultaneously much more complicated and much more obvious.

I never thought people were anything other than omnivores; I just thought, like many vegans, that since we could choose not to eat meat, this choice was a moral imperative. I also have to admit, I never really had any problem with people hunting for food, reasoning that it was far superior to grabbing a shrink-wrapped piece of factory meat at the local supermarket.

But the fact is, killing isn’t always wrong. Is it worse for an animal to be raised with care and protection, then – as painlessly as possible – killed for meat, or for an animal to be torn apart by the claws of another animal and eaten alive, which is what happens in “nature”? Why is it okay for other omnivorous animals to eat meat, but not for humans, even though we generally go out of our way to reduce or eliminate the suffering of any animal we’re hunting or slaughtering? Is it really wise to move so far away from the omnivorous diet that our species has evolved, over hundreds of thousands of years, to eat? Do we really want to support industrial agriculture as we depend upon mass-produced processed soy products, out-of-season vegetables, and artificially sourced B12? And without manure, without petroleum-powered (and often petroleum-based) fertilizers, where is all this soy and grain going to come from to feed the starving, desperate world? Ignoring these very real questions is a dangerous luxury afforded only to those of us compassion-driven urbanites who are totally removed from and ignorant of where, in fact, real food comes from.

So, yeah, I’ve changed my mind.

I know many people won’t agree, and I will get angry comments and catty chattering on other sites. However, I respect the impulse of vegans, which is one of compassion. I have just come to the conclusion that they are asking the wrong questions. The vegan diet and lifestyle is not, after all, the solution. Of course it pains me to acknowledge this, and to say it. It’s been a difficult road. But I cannot profess something I no longer believe.

Likewise, I would like to apologize to all my friends. Even though I strongly object to the commonplace claim that all vegans are judgmental and pushy, I have nevertheless been guilty of my share of misplaced judgment. In my zealousness, I no doubt castigated people unfairly and demonstrated a self-righteous attitude. For that I am sorry. None of my friends, be they vegans or barbecue-lovers, are murderous or even unkind. If they were, they wouldn’t be my friends. I find now that the wall of mutual incomprehensibility between me and these friends has fallen away. My disgust at their refusal to admit that killing is always wrong has turned into a humbled shame at my own ignorance of where food comes from, and how.

Yet, because of my nearly two years of veganism, I now know so much more about cooking, and for that I am ecstatically thankful. Herbs, in particular, are a revelation. My vegan readers will no doubt remove this site from their blogroll, and I don’t blame them. My non-vegan readers will probably enjoy the wider range of foodstuffs I’ll be talking about. I hope that readers will patronize their own local, organic, sustainable food producers.

Further reading:
Interview with an Ex-Vegan: Stella
A Vegan No More
heart-change
The Vegetarian Myth